We both ride Dahon 7-speed folding bikes. Even though these are "small wheels" we have found that standard panniers work with them.

In this photo, you see Therese with her panniers with a blue pack on top. This summer, we received this blue Cotopaxi day pack in our Cairn box. We thought we might use it for an off bike excursion, but this never happened. What it was great for was for carrying the tent, trekking poles, jackets and misc items we wanted quick access to during the day. Yes, we could just strap the tent and poles on top, but it was really nice to have a very lightweight catch all.

As for her panniers, they are made by Topeak and are actually dry bags. In general, they held a pillow, quilt, air mattress, off bike clothes, second set of bike clothes, jacket, hat, bath items and mini towel. 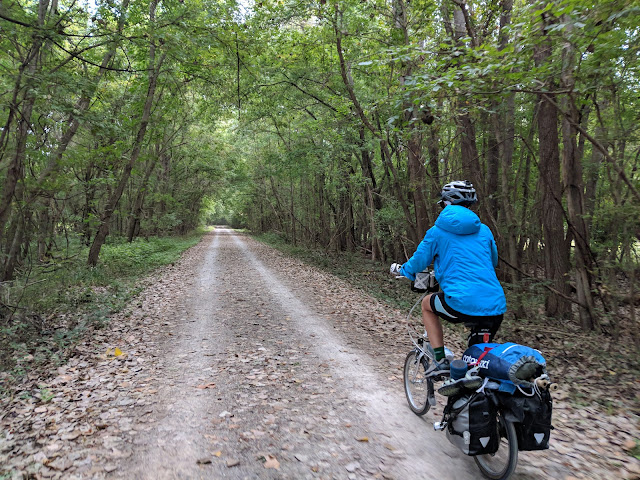 I used the ArcEnCiel panniers and really liked them because I was able to leave the two side bags (which are a single unit) attached to my bike the entire trip. They held my pillow, quilt, air mattress, off bike clothes, second set of bike clothes, jacket, hat, battery, bath items/towel.

The bag on top had four buckles that were quick and easy to undo and also doubled as a way to attach my spare shoes. The top bag was really roomy and held our stove and food for five nights of camping. There was also a strap that I could attach to the top bag; although it was bit clunky, I was actually able to carry the whole setup over my shoulder. This was really helpful when boarding the train. 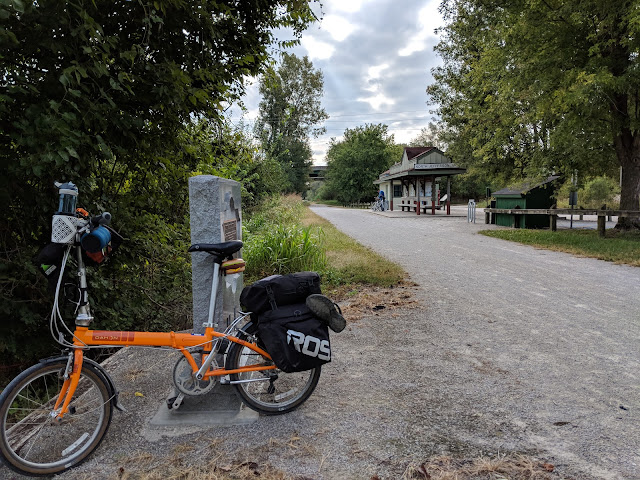 My bags are water resistant and did come with a cover, but it would be unwieldy to ride with them covered on this particular bike. So, when there is a threat of serious rain, we do reconfigure things a bit to make sure that nothing really important gets wet. That said, we did have a little moisture, but my bags did just fine and nothing inside was wet.
at October 10, 2018

Email ThisBlogThis!Share to TwitterShare to FacebookShare to Pinterest
Labels: Gear