What a day! Much to our surprise when we walked over to the bathroom to retrieve our clothes that we had left hanging to dry the previous evening, we found our bicycle clothes, but both of our bras were gone! The only thing we could figure was that the little old (homeless?) lady who was camped nearby must have needed them way more than we did.
Had a great morning exploring the town of Hermann: bakery delights, visitor center, a historic tour, wine tasting, and lunch. The lady at the visitor center was in her mid 70s and very nice. We told her our bra story and she just said "what a great reason to go braless." We assured her that we had spares and I commented that I thought Missourians were a bit more proper. She laughed and said, "There's a reason they call it the "Show Me" state!" 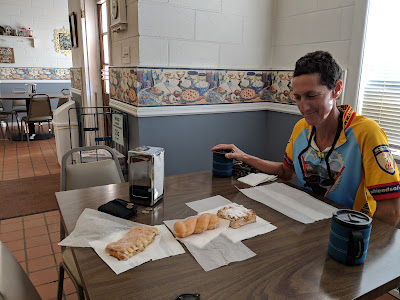 The tour was of two of the  original homes built by the Germans. One of the homes was lived in until 1968 by a woman who lived to be 98 years old. She knew that she wanted to donate the home to the historical society, and would not have any upgrades. She lived in it the same way her entire life and when she passed away the house perfectly reflected how one would have lived in it during the 1800s, complete with the original furnishings. In the basement was a printing press where there had been a newspaper printed and shipped to various cities and even Germany. They also included chapters from the book "Uncle Tom's Cabin" in their paper; the Germans living in this area were adamantly opposed to slavery. Had anyone found out they were doing this, they would have been arrested. The house was also adjacent to one of the original wineries in town. This particular winery won the top wine award in the 1890s in Europe. Norton grapes. 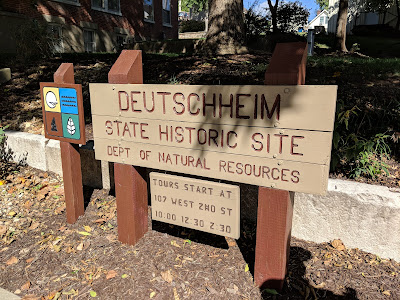 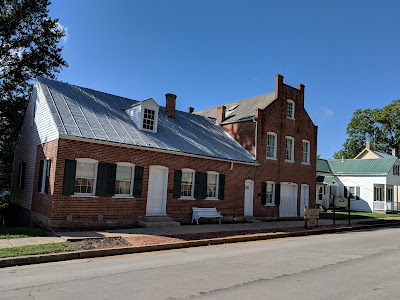 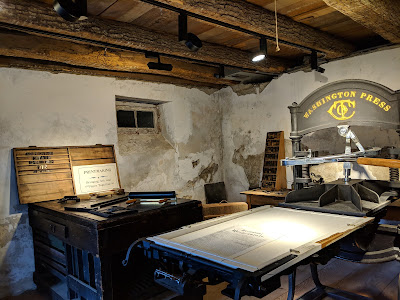 We finally left around 2pm and started our 40 mile ride east to Augusta. Today was extremely hot and windy, and in the direct sun the air was so thick it felt like you could chew it. The wind just whirled around and around, sometimes ahead wind and sometimes that tail wind. 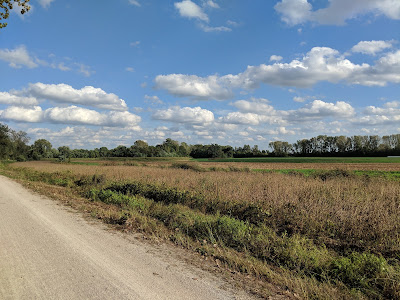 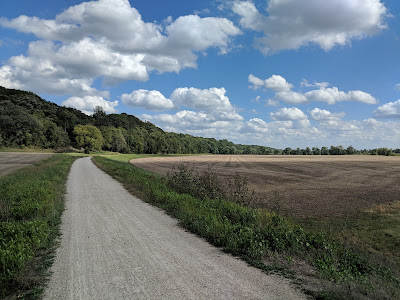 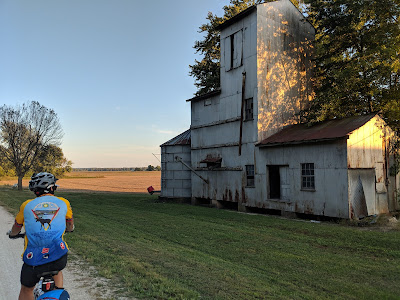 We had become accustomed to finding water at almost all of the trailheads, but this was not the case today. We found a vending machine in front of a little tiny Katy Trail store in Peers, Missouri and bought cold drinks. We were very thankful for the vending machine.
We turned off at about 6:30pm and pushed our bikes up a steep incline to the Klondike State Park only to find about 46 sixth graders staying in the cabins for science camp. They were all very nice kids, but we had at least a dozen of them in front of us in the shower line...and there were only two showers. With no adult chaperone in the bathroom, I just tried to do what I'd imagine my friend Elly (a 6th grade teacher) would do to move them along. We got a system worked out so that the kids would shower and go get changed in the bathroom stalls around the corner. The last few girls in line were quite appreciative and policed this process pretty well. I think they thought they were never going to get their turn.

After looking at all the campsites and with the chance of rain showers this evening we decided that we would go for our "shelter camping" strategy. So we found a great big shelter, pushed a couple of tables aside, set up our tent, had dinner, said goodnight and went to sleep with a gentle breeze (80 degrees at 11pm) and the roar of the coal burning power plant in the background.

Cyclist TIP: You will be exposed during this part of the ride, and most of the places catering to bikes close up by 4 (if they are even open on the weekdays). So, make sure to take advantage of the water at the Hermann Visitor Center and Marthasville. There is no water at Treolar. Peers had a vending machine, but that could be sold out.
at October 03, 2018