Tonight we were headed for the South Blockade Lake campground where we would be spending the next two nights. Watching the weather, things were not looking too good for us — heavy rain and thunderstorms.

After a group discussion over lunch at the Coyote Sage Cafe about the weather (it was raining pretty good at this point), we decided to check out our options. No cabin at Custer was available for the nigh. But, Big Ker found us an amazing place to stay in the Custer, the Shady Rest Motel Cabins.


Our hostess was amazing...she had put us in a "room" which actually had a kitchen and three sleeping areas...and she had turned on the heat to warm it up for us. We were thrilled to be inside getting hot showers while it poured rain outside. 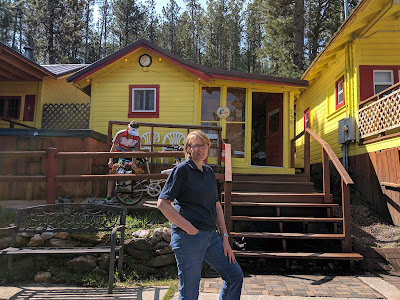 And the next morning, the sun came out! 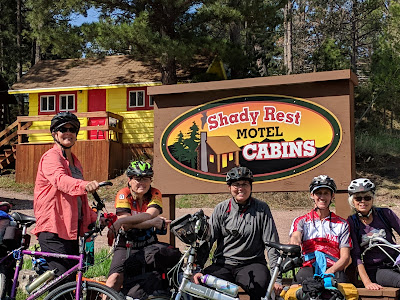 Total mileage for the day: 13.7 miles

America's Smallest Mall is located in Rochford and is actually fairly well stocked for cyclists -- snacks, souvenirs, a few tools, and various things that you might need on a bike trip. 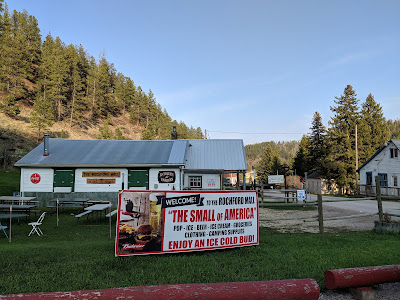 Today's ride was much easier. More Dayquill (the whiskey didn't seem to have cured my cold) meant that I had no body aches from Day 1. 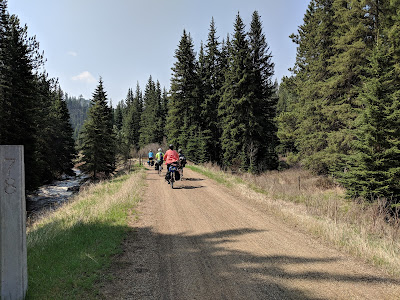 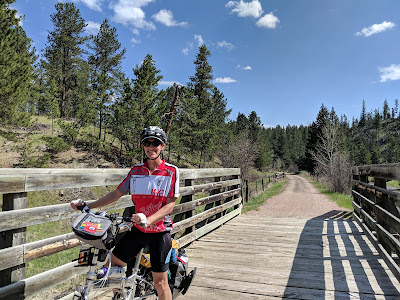 Our destination was Hill City, which had been hit by the snow storm and was followed by some pretty intense flooding. At one point, the Facebook page had basically said, "don't come here - no power, flooding,..."

So we called the campground where we had reserved a little cabin and the lady on the other end of the line had assured us that we would be able to access the campground and that the bridge was just fine.

Oh brother. What we should have asked was, "have you walked from the trail, over the bridge, to the cabin?" What we found was that there was a rushing river, and yes the bridge was above water, but there was no way to get to the bridge on eithe side. Sigh. It had been a long day and I felt crappy. No amount of DayQuill was going to make this better. We ended up passing the campground and then crossing over a bridge on private property (not our typical M.O.) and then riding back up the highway. Aside from being misled about the flood level, we were delighted to find an amazing little cabin -- super cute and clean. 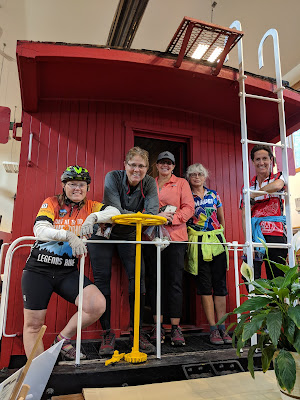 Total mileage for the day: 26.5 miles 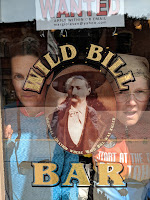 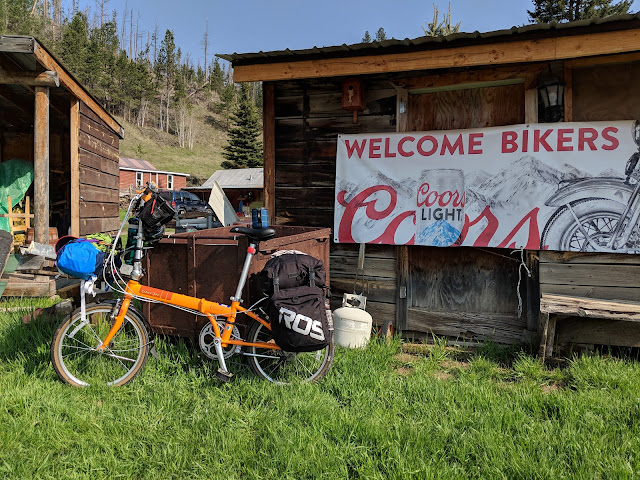 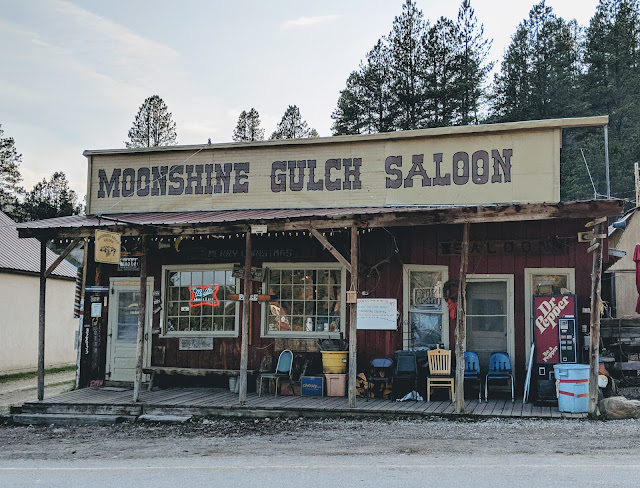 
Tip: If you need a place to stay, call Betsy at the Moonshine Gulch Saloon and ask if you can stay in her trailer. She does not advertise and the only way to reach her is by phone. The saloon is open until the wee hours, so if you do call, wait until mid-afternoon or you might wake her up. In addition to the room we stayed in, there was a second room with a couple of bunk beds and bathroom.
at May 29, 2019 No comments:

When we read that the George S. Mickelson trail was one of the top 10 rail trails, we knew we had to go. Knowing that we are in it for more than just the ride, we wanted to make sure that we didn't miss out on any local treasures. So we joined the GSM Facebook page, read the stories from other riders, and began to plan our trip.

We had done enough research to know that parts of this trail are a bit remote. We had a hard time locating a place to stay in the Rochford area and there seemed to be nowhere at all to stay in the last 30 miles -- meaning that our last day would be in the 50-mile range.

Our team: five ladies, mid 50s and 60s...we usually do some pre-trip rides, but none of us are what you would call cyclists. Our plan was to meet up in Edgewood, hop on a shuttle to Deadwood and go from there.

Below you will find the details about our fine adventure.

After a bit of research, it looked like the best time of year was late May/early June. So after talking it up to several of our friends, five of us committed to doing the ride. So we mapped out our ride, packed our bike packing gear and headed east with an eye on the weather and fingers crossed.

We left home on May 20th with a target start date of meeting the group in Edgemont on Tuesday, May 28th. Well, as it turns out, there was a severe snow storm in the Black Hills, leaving about two feet of snow in the Deadwood area just a few days before we were to arrive there. On top of that there was flooding May 26th-28th in Hill City, one of the places where we were planning to stay. But, our little group was all in and we met up with the Edgemont as planned on the 28th.

Two logistical things that worked well: the shuttle service and our hotel, Tru by Hilton.

Shuttle: We booked through Deadwheels Bike Shuttle Service, but when the driver called he said he was with Rabbit Bikes, which totally confused us, until we figured out that they are one and the same. Our driver was courteous, even asking us which route we preferred, delivered us safely to our hotel in Deadwood, where we started our ride the next day. One issue though was there was an unsecured trailer tire in the trailer which ended up rolling around and hitting one of our bikes during the course of the shuttle ride.

Hotel: After talking pretty extensively with the Black Hills Tourism folks (everyone in the area uses them for bookings), we ended up staying at Tru. We loved the wonderful staff — they were super accommodating — everything from giving us adjoining rooms to providing an odd shaped Allen wrench and gluten-free breakfast options for the Celiac in the group. The location positive is that we could walk to downtown Deadwood; the location negative was that it was a couple miles to the trail (I was a little envious when I saw some of the lodging that was right on the trail as we left town).

Great morning at the Wild Rose...they have this great little kitchen/lounge room where we made our breakfast! Easy cleanup and a fast departure made for a great start to our morning.

Headed down the highway and of to see our friends in Montana. After two days of relaxing, checking out the local sites and Sister's dedicated gluten free bakery in Belgrade, we made the long drive to Badlands and found ourselves surrounded by BISON!

We had decided that we wanted to spend a day or two riding the bike trails up in the Spokane area. The weather looked good and we were looking to stay two nights.

After looking at the possible places to stay in the Spokane area we decided to head for the Riverside State Park campground. But when we got there what we found was not what we expected. There was only one small site left, available for a single night, jammed in among th the other sites. It was not at all what we were expecting from the reviews.

So we got back in the car and made our way north to another campground. But this time it was about 8 p.m. and we were tired. Imagine our disappointment when we pulled up to the second campground and it was closed. Fortunately we had seen in RV park about a mile down the road. We pulled in and they had a space for us. Typically we have always kind of turned up our noses at RV parks, but this was a lifesaver. The host, Lon, was a great guy. Later learned that most of the people were full-timers living there and he ran a very tight ship. This being our first trip with our new kitchen that I had built worked out pretty well because I was able to fine-tune things and even borrow his staple gun.

The next day we went down to Spokane, had a terrific ride on the bike path and enjoyed a fabulous meal at Cole's, a dedicated gluten-free restaurant.