Despite the weather concerns of the previous days, today was a beautiful day. We arose early knowing that we had a full day of riding and that Big Ker was on a tight timeline to get home to Bozeman.

Knowing that we had 5-8 miles of uphill from our campground, we were looking forward to to getting to the summit so that we could get get in some faster miles. I was so happy when I got to the "top" that I yelled to the others, "we made it" at which point Big Ker jumped off of her bike and started singing and dancing. The celebration was short-lived when we realized that around the next bend we would be pedaling uphill again. Sigh.

One of the highlights was of course Crazy Horse, which you could see from the trail. We stopped for a bit to take in the view and continued on our way.

We had contacted a locale Facebook group about the potential for lunchtime snacks and drinks in Pringle and were looking forward to checking out the town. What we found when we arrived was a giant pile of old bicycles. At first we thought maybe they hated bikers and this was a trash pile. But then we saw Bike Sculpture in Google Maps and the interpretive sign as we got closer.

After poking around a bit, we learned that the store was not open (nor was there a plan to open at all for the season). I did find a bar and poked my head in the door to find the barkeeper getting prepping for the day, but they were not open for business. Somehow I talked them into a soda, but that was as far as I got...probably for the best, as we noticed what seemed to be a giant barrel of rancid oil out back.

Off we went, a beautiful day on the trail. One of the prettiest areas was along the sheepherder ridge. Take your time here and enjoy the views.

Rolling in to Edgemont around 3:30 or so, we were all in pretty good spirits....and then we realized that we would be going nowhere for a while because a train was on the tracks. Two other cyclists were also waiting...it was pretty hot and we were all antsy to get moving. I looked at the map and could see that the only way around was a very, very long detour in the hot sun.

The two young guys decided they didn't want to wait and went for the detour. We waited and waited. Eventually the train moved on and we finished up our ride at the trailhead in the park. As we relaxed in the shade, the two cyclists finally arrived, hot and tired. The detour was a good five miles. We were glad we had stayed back and waited for the train to pass through.

We loaded up our cars and headed off in different directions. Another trip in the books.

Total mileage for the day: about 49 miles


Tips: Pringle really doesn't have reliably open services, so be sure that you have enough food/water for the day. As for the GMRT, the overall elevation is "downhill" when traveling from N to S, but there was much pedaling to be done on this trip. Be aware.
at June 02, 2019 No comments:

The kind people at Custer State Park had set us up with a cabin for Saturday night. It was a pretty short ride from Custer to the "Stockade" where we spent a bit of time looking around. We ended up getting to the campground early (no rain!) where we found another super cute cabin. The cleaning crew was just about done prepping for us, so we hung out a bit, dropped our stuff and then went touring around the park. 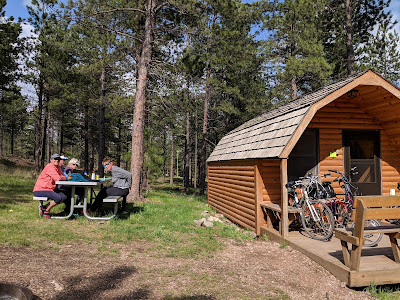 The ride around Stockade Lake was great. We headed up to Hwy 12, where there was very little traffic and continued on...we ended up going UPhill and eventually came to a summit sign. We decided to go for it and had a wonderful ride down, down, down, and down some more to a small lodge. No one wanted to think about the ride back up....certainly not myself! I was looking for someone with a rig big enough for all of our bikes, when I spied a couple of fishermen. So I went on over and asked if they might take us up to the top of the hill for a quick $20...of course! They were headed back to camp with their fish, so we rode over and met their families. Very shortly, we were all on board and headed up the very steep, steep, steep road. They ended up dropping us at the intersection of the lake loop road and Hwy 12; we tried to pay them, but they wouldn't take a dime. As we have found on all of our trips — people are kind and will always go out of their way to lend a hand. 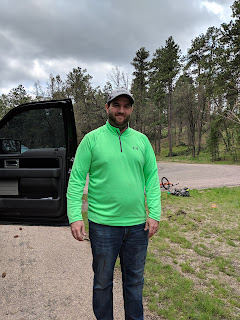 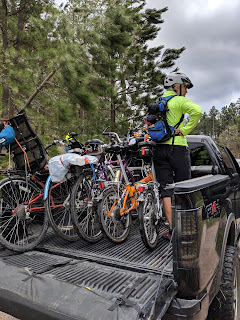 We hopped on our bikes and started riding back...only to find ourselves in a very heavy hailstorm! A quick 10 minute ride and we were back to camp and some very awesome hot showers!

Total mileage for the day: about 11 miles