Another day in the bag. Today's ride was 44.9 miles, which also included about a half mile hike up to get up to the Les Bourgeois Vineyards in Rocheport. 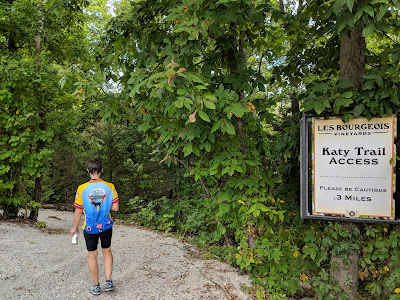 We knew that we were going to get to relax this morning because the Boonville Museum we wanted to see wasn't going to open until 10am. So we sat in Kemper Park enjoying our coffee and talking to a couple who walked by. Took a bike ride around town looking at the historic buildings, but our real intention was to get a donut. I found something called Yummy Donuts, but was a little skeptical because the maple bar I got for a $1.40 was awfully small. But one bite, and I was a fan. Delicious. We also picked up a few things at the grocery store across from the donut place.

Finally made our way to the museum and then took a little side trip to see the Katy Trail bridge, which is partially restored and will cost quite a bit to do a complete restoration. Was kind of neat to look at it. 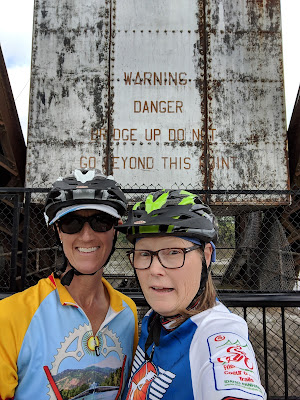 Stop or you'll end up in the Missouri!

Had a nice ride to Rocheport, which was an extremely cute little town, and if I were going to do this again I would probably stay there. 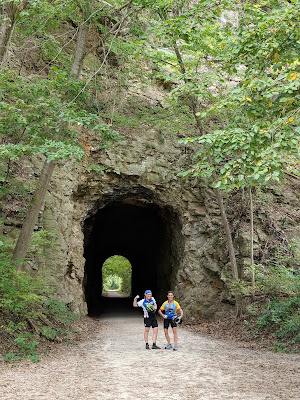 About a mile down the path there was a little trail that went up to the winery. So we pushed our bikes up the trail until we could do no more and then walk the rest of the way up. They had some pretty good pulled pork and a kind of vinegary BBQ sauce. The best part though was the old guy sitting next to me. I asked him how the wine was he says, "oh pretty good; I'm going to have a beer when I'm done." I thought he might perhaps want to enjoy a craft beer that they made at the vineyard, but no. The next thing I see is him ordering his Bud Lite at the counter.

Cyclist TIP: I had to do this all over again, I probably would have just had a glass of wine at the place right on the trail, enjoyed the cute little town of Rocheport and skipped the steep hike up the bluff.

We continued along the trail some more and  found quite a few people out today. It turns out we were getting close to Columbia Missouri which is a big college town. It was an 8.8 mile spur that you could ride to go to Columbia. We did not do that but instead continued on our way. The trail was rather flat, slightly downhill, and we finally got rid of that headwind. I will say after 3 days of 40-plus miles on our bikes, my legs are pretty tired. T told me that I needed to, "suck her tire," which actually means I need to get really close so that I could draft behind her. I couldn't believe how easy it was to ride my bike in that position. Kind of like when you follow somebody else in the snow. I'm a convert to this style of riding, it saved my legs today.

After a while, we found that we were pretty much the only ones on the bike trail and the only towns that we saw were essentially old rail stops where there might be one or two houses. At one of these houses we saw our first Confederate flag waving proudly on the flagpole next to the US flag. That in and a small Trump sign have been the only things we've seen in this red state that reflect people's political beliefs.

We continued riding and suddenly came up on boathenge! That was something. A little longer and we came up on something called Cooper's Landing where they were playing music. Let's just say it was kind of like the Eugene Country Fair meets the south, on a very, very small scale of course. Even the outhouse was painted in some kind of funky psychedelic pattern. 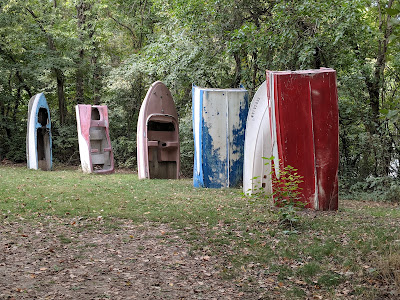 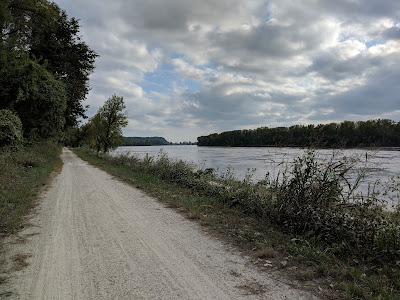 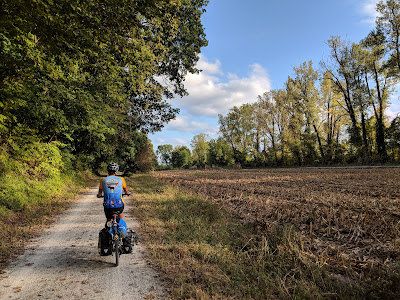 Finally pulled in to Hartsburg around 6pm and found the wonderful Lions Park. 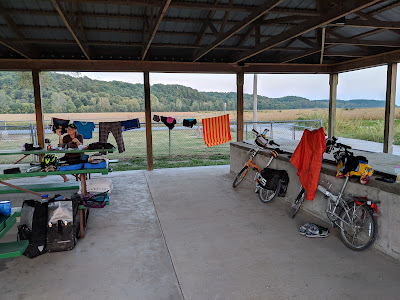 We were tired, hot, and sticky and went to check out the bathroom and found one teensy-weensy sink. That was not going to do, and then I saw a hose going around between the Lions Club building and a little shed. A couple of well positioned trash cans did the trick. 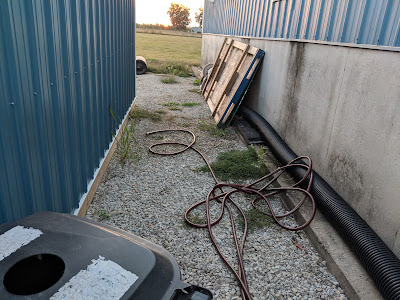 Cyclist TIP: You can make arrangements to camp in Hartsburg at the Lioms Club ball park by calling ahead.
at September 30, 2018