Gearing Up: Our Dahon Folding Bicycles

On our upcoming Katy Trail adventure, we will be riding our Dahon D7 folding bicycles — I ride this flashy orange model and T rides the silver Mariner — both have seven gears. For some reason, people seem to think that these are for commuting around town...but they are actually pretty awesome for long distance riding. Although these are rated as "street" bikes, we have ridden them on gravel rails to trails with no problems.

Riding the Weiser River Trail in Idaho last May (2018), I think I spent most of the trip in gears 1-3. It was a fantastic experience, with our total miles around 180 or so. Most of the gravel was pretty thin, though there were areas where there were rocks on the trail and in some spots cattle had crossed the trail, which made for an incredibly bumpy ride (think dried mud with hoof indentations). We rode north first (uphill); on our way back we pretty much had a headwind, so we pedaled just about the entire time.

We were self contained, carrying all of our camping gear, though we did splurge for a night in a bed and breakfast along the way. 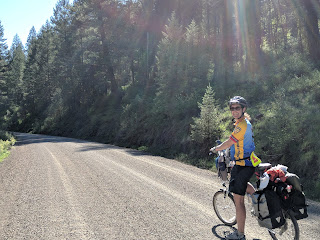