Headed over to Beatty to see if it had changed much since the last time I was there back a couple decades ago. It seemed bigger, but maybe not. Stopped at the small museum to ask a few questions regarding what to do in the area...the museum person said that we should head over and check out the Spicer Ranch where you can bike ride, hike, camp and so forth. We jokingly asked about showers and she said she thought they were set up for that as well. 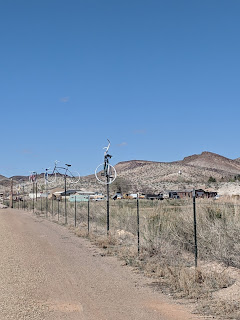 So off we went in search of the ranch. When we arrived, we were pretty amazed to find a very large tract of land set aside for mountain biking with a little donations box. 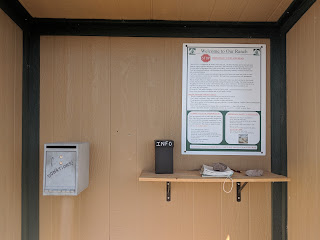 There were teenagers from Las Vegas participating in a mountain bike race. We watched for a bit, talked to a lady who turned out to be one of the owners of the place, and ended up taking advantage of the wonderful shower facilities. And yes, we left a donation! 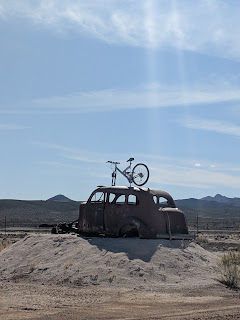 On our way back to Beatty, we decided to look for a few Geocaches, though we passed up the one at the old Angel's Landing (think red light). Ended up finding one right on the highway in front of a place that sells every kind of military ammo can and other boxes that you can imagine. Had quite a conversation with the owner -- nice guy, but a bit on the conspiracy theory side of life.