Woke up this morning to some great tasting coffee and homemade bread at our Airbnb. T went out to get our bikes from the garage and found that I had a flat tire. So we changed the tire, got some groceries, had to detour around a train that was stopped on the tracks in order to get back to the trail. By the time we finally got going it was after 11:00am.

It was a hot ride today, somewhere in the high 80s. Fortunately the trees provided a nice amount of shade as we rode the trail. Cyclists on the GAP had warned us about how bumpy the trail would be. However, having ridden the Weiser River trail in Idaho, we thought the C&O was pretty decent. 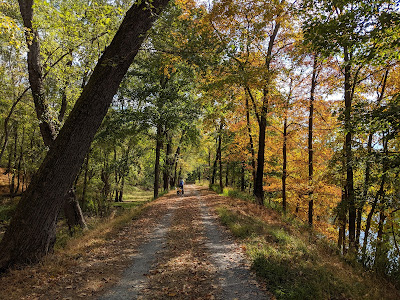 The canal and locks are very interesting. We stopped to look at various structures along the way. At one point after saying hello to a couple of other cyclists, T noticed that she had a flat tire. No worries, I had just learned how to change a flat that very morning! In about 5 minutes we were ready to go.

The Paw Paw Tunnel was a little disconcerting. In this tunnel, the canal was still intact and you were on the path up above the water. Personally, I couldn't get out of there fast enough.

We got to where we thought we would camp, only to find a couple was already there and the water pump was not working. They didn't seem too friendly so we continued on to the Devil's Alley at Milepost 144. There was already somebody camping there, but there was room for us.

It was almost six o'clock and it was VERY hot and muggy. We cleaned up in the Potomac River and filtered some drinking water (the water pump was treated with iodine, and that was all you could smell, so we opted for river water), and made our dinner.

It was a long hot night.

Terrain / Trail Conditions: lightly graveled with some roots and rocks.

Tip: A lot of the camps along the trail were pretty deep in the trees. But this camp was a little more open and had a nice view of the river.